Abu Tha’labah Khashi narrates that the Prophet (peace and blessings of Allaah be upon him) said:

There are three types of jinn, one type has wings and flies in the air. And there is a kind of serpent and a dog, and a kind of inhabitants and coaches. This hadith has been narrated by Tahawi in Muskil al-Athar (4/95) and by Tabarani in Tabarani Kabir (22/114) and Shaykh al-Albani has said in Mushkah (21206 no. 4148) What is narrated with

1. Ghoul: This is the most dangerous and evil jinn who is not familiar with anyone. Lives in the forest, changes shape and is visible at night and is usually seen by a traveler traveling alone who thinks he is a human being like himself, it leads the traveler astray.

2. Prayer: It also lives in the jungles. When it sees a human being, it starts dancing in front of it and plays the game of cat and mouse.

3. Traitor: It is also found in the outskirts of Egypt and Yemen. When you see it, you fall unconscious.

The “monster” mentioned in the Qur’an. Monster is the name of a tribe of giants. The giants belonging to this tribe are called monsters. The cabinet of Hazrat Sulayman (as) was meeting. He said in his cabinet that who will bring the throne of Queen Bilqis is in the Qur’an:

The monster from the jinn said,

The monster said, “I will bring his throne to Solomon before he leaves you.” But there was a servant of Allah in the same cabinet who said:

He said, “I know the knowledge of the Book, but I am not afraid of it.”

The man who knew the Book said: O Solomon! I will bring his throne before the twinkling of an eye. And then he brought it. An important point from this incident is that we have learned that Allah Almighty has endowed man with more knowledge and power than the jinn. But he has built ships and vehicles that can travel months in hours. One can not only see people sitting in one country sitting in another country but also talk to them live and convey their voice to them. 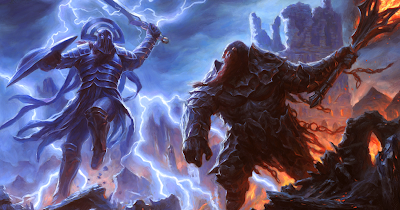 When the monster appeared on a woman

Abu Raqiyah is an Arab Raqiyah. When he recited Raqiyah on a woman who was present, he said, “I am a monster.” Let them disappear so that people will understand that our offering has been accepted.

In the same way, a person used to have epileptic seizures. He went to a fake magician and he said, “Take him to some shrine and give him a cold there. It will be fine.” So they did, and he was healed. This is actually a satanic plan to make a person a polytheist. Since the sorcerer is in contact with the devils, he suggests that when a patient goes, it is the devil who first annoys him and causes epileptic seizures. I used to leave now so that he can be sure that the person in the grave has cured me.

Just as there is a cousin with man, so there are some angels with man, an angel is the one who has just been mentioned that he preaches goodness and truth to man. In addition to this, there are two other angels who have been described in the Qur’an as the scribes of the Qur’an, that is, one writes down the virtues of man and one writes down the sins of man. Some traditions show that in addition to these three angels, there are other angels with man who are responsible for the security of man because there are many creatures in this universe who can kill man in a matter of moments. These angels protect human beings as long as Allah wills. That is why we often see in our lives that such and such a person was about to fall from the roof and barely escaped, or such and such a person under the car. He was about to come, but he survived. In fact, these angels protect him and save him. But when the accident is approved by Allah, the angels retreat and the accident happens.

In the same way, some angels live with human beings all the time and there are some angels who come at the request of man, for example, if you want an angel to stand by your side when you sleep at night till morning. The way to do this is to recite Ayatollah Al-Kursi. As soon as you recite Ayatollah Al-Kursi, an angel will come and stand up and protect you till morning.

There is a hadith:

Translation: It is in Bukhari that when you come to bed and recite the verse of Al-Kursi, a guardian is appointed by Allah Almighty and Satan cannot come near you till morning.

I said: No, then the Messenger of Allah told me, “He was the devil.” (Bukhari, Kitab al-Wakalat)

There is also a type of jinn that puts a burden on a human being while he is asleep. It happens to almost every one of us that we are burdened while sleeping at night. If we want to move, we cannot move. Let’s read one and a half. This burden is removed immediately because Ayatollah Al-Kursi is death for the jinn.

1 thought on “Episode 2 Types of giants”