How did marriages take place in the time of Sahaba? 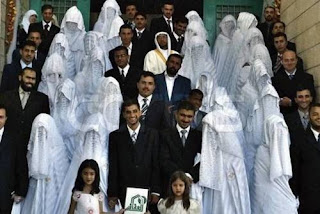 When Hazrat Fatima bint Qais was divorced by her husband, Hazrat Mu’awiyah and Abul Jahm sent a message of marriage. Two personalities are sending the message of marriage. When Allah Almighty informed the Prophet (peace and blessings of Allah be upon him), the Prophet (peace and blessings of Allah be upon him) said to the saints of Hazrat Fatima bint Qais: Therefore, do not marry your daughter to them and “Abul Jahm” remains Abul Jahm. Leave her and marry Osama bin Zayd.
See what a society it was that so many great relationships are coming for the widow that the Prophet (peace and blessings of Allaah be upon him) has to intervene and make a decision. All these were the blessings of polygamy.
Asma bint Umays who became a widow after the martyrdom of her young husband Jafar Tayyar in the battle of Mota is in the traditions:
Just after the ‘iddah had passed, Hazrat Abu Bakr (RA) sent a message of marriage which Hazrat Asma accepted. Hazrat Abu Bakr (RA) married her and then married her.
Hazrat Ali (RA) also expressed his desire to marry you but Hazrat Asma bint Umays refused saying: O Abul Hassan, leave him alone because you are a person who is not serious in nature.
Also read: Companions getting married
Also read: Polygamy List In Urdu .. List In English
See, on this occasion, Hazrat Abu Bakr Siddiq (may Allah be pleased with him), if he thought that I have already had two marriages, the reward of the first two should not be less than one more marriage, Why worry? If there is no justice in the wives, then what will I answer to Allah Almighty on the Day of Resurrection. Therefore, we should all be engaged in the affairs of religion and the world with contentment of heart. After the death of Hazrat Abu Bakr, Hazrat Ali again sent a marriage message to Asma bint Qais, which he accepted.
In the incidents of the Companions you will find so many times that one woman became a widow four times and she never had any problem in marriage.
Hazrat Umar (RA) sent a message of marriage to Umm Kulthum (RA). She rejected the message saying that she had no interest in marrying him.
Amir al-mu’minin sent a message to Umm Iban bint Utbah bin Shaybah. Umm Iban also refused, saying that they were of a strict nature. Will go