Note: This book is written by Maulana Syed Abdul Wahab Shirazi. The original book is in Urdu, click here to visit their YouTube channel.

The world of magic and giants and operations

The purpose of writing the book

On July 1, 2019, I launched a series of videos on YouTube called The World of Magic and Giants and Operations. The purpose of starting this series was to tell people about the world of operations and what to do here. What happens is that magicians not only rob people of their wealth and honor but also deprive them of faith. The practice is usually done in the name of spirituality and is considered a part or branch of religion, so a common man is a common man, well-educated people and even ordinary scholars are not aware of the details of this fraud and irreligion. Are Practitioners were first considered flawed in society and were called priests, mystics, and astrologers, but then gradually some ignorant scholars, known as the religious class, also stepped into the field, just a few from the market. Pick up the books of practice and look at them and start writing amulets to the people. Started What is more, the religious conception of the people has gone wrong and the people have considered the religion of Islam and the Qur’an as mere books of blessings, benefits and practices. It became a belief that this agent knows the unseen and is aware of my past, future and my profit and loss. People have a strange idea about the Qur’an. They think that the Qur’an is just a book that if this verse is read so many times, then the business runs and by putting a sticker of such and such verse in the shop, the shop runs. However, the real purpose of the Qur’an is to understand it and to know and follow the message of Allah. 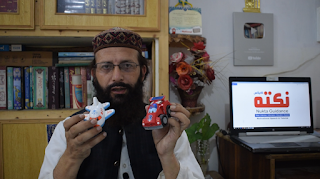 Also some time ago I started a series of videos on antichrist which people liked very much and people benefited a lot. I was advised by many people to make some videos on magic giants and practices. I was thinking about it but I didn’t understand how to talk about it. Whenever I intended to make a video, no topic came up. I just kept talking in my mind. Then when Allah approved, such It is rumored that about two dozen videos have been made in a year so far and this series is still going on.

During this time I got a call from a gentleman from Lahore that I want to write your videos in book form. I also thanked him and said that both of them will do this work together. But then again he did not contact me and I did not dare. For the last two or three days now, I have been thinking that this topic should be organized and written in a systematic way so that people can use it. So today, on 27/11/2020, in the name of Allah. I am starting this work. Whenever I complete a single topic, I will write a couple of pages and immediately post it in the form of an article on my website.

Including publishing on social media so that the book is ready as well as in the form of articles to reach the public.

May Allah help me not only to complete this subject as soon as possible but also to help me to write the right thing.